Polaroid are relatively new to the world of cycling sunglasses and currently have four models in their range; the Mercury, Ascend, Peak and Vector models.

We've reviewed the top Vector model, which comes with three clip in lenses: clear, tinted and polarised and costs around Â£75. Polaroid say that the polarised lenses reduce glare and reflections, therefore helping your vision and ability to spot changes in surface or hazards.

You can read more about the technology here: Polaroid Sunglasses Website

We took them out in windy cold weather and warm sunny weather, courtesy of our variable UK climate in springtime! 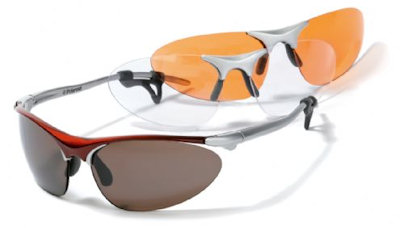 First impressions out of the box were of an extremely lightweight and very streamlined pair of glasses, which are quite rounded in design compared to some of the more aggressive or angular styles available. Someone commented that they looked slightly "girly", while another rider liked the minimalist design; obviously its a matter of taste and there are more angular models in the range.

One of the most noticeable things was the thin frame and this meant that after not too long it was easy to forget that you were wearing them, which is one of the most desirable characteristics for any glasses that might be used in racing. There are plenty of glasses around that poke into your head behind your ear, after a couple of hours !

We did a bit of hard climbing in cold, slightly damp windy weather and there was only a trace of steaming on these glasses when we reached the top. Another positive was that there was not much wind penetration, so eyes were well protected against the chill.

They do fit very close to your eyes at the outside corners; this did cause a minor issue with long eyelashes where the bridge had to be adjusted to push the glasses a bit further away. A bit of extra concavity might help.

A week or so later they were taken out in much warmer weather for an entire day, in sunshine. There was a fair bit of heat output on some of the hills, but again the glasses were pretty unnoticeable and at the end of the day there weren't any marks or soreness where they had been resting.

We also cycled a few miles through some forestry where the sunlight and shadows were alternating; normally this would make spotting potholes and rocks tricky, but the polarised lenses did make a difference to the contrast on the ground, which made riding much less unnerving.

Swapping the lenses around is very easy with a single central clip on the bridge.

There wasn't any sign of the sunglasses bobbing loose on the bumps, this may have been because of the novel rubber grips behind the ears, although it felt as if the glasses would stay on your head anyway. The grips did make it a little tricky if you want it to stick the glasses in your helmet though.

All in all, pretty impressive cycling sunglasses at this price point. It would be interesting although tricky to do some sort of blind comparison with a Â£120 model from another brand range, perhaps something from the Giro or Oakley ranges

Back to more brands
in Clothing